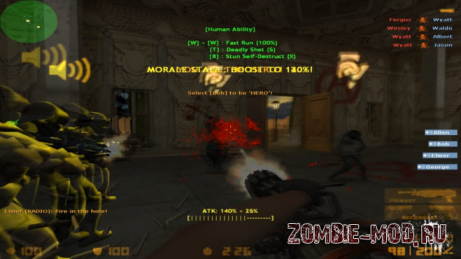 
Zombie 5: Evolution is a new gameplay for Counter-Strike 1.6, developed as an AMX MOD X plugin. It’s a zombie infection mode with new playing style. The round starts with 20 seconds of counting, random players will be chosen as zombies and sidekicks. Sidekick is a type of player that wields powerful weapon. In order to evolve, zombies must find and absorb ‘Zombie Crystal’, which dead zombies drop on death. At midnight, random humans will be chosen as Heroes, zombies become stronger… Let’s the game begin.
Game Objectives

Human: Eliminate all zombies or survive until the end
Zombie: Infect all humans. Absorb ‘Zombie Crystal’ and evolve to unlock zombie class abilities

Zombie Crystals will be dropped randomly in the map or when a zombie dies
Stick with other humans to increase your ATK (fire power)
Your ATK will increase if your near teammate dies
After zombies appear, random humans will be chosen as ‘Sidekick’
At midnight, random humans will be chosen as ‘Hero’
Each zombie has 2 abilities, you must evolve to unlock and use them.
Supplybox will be dropped randomly to aid humans. Supplybox location will be shown
Zombies are not killed with Headshot will revive in 5 seconds.
Humans are able to use skill ‘Sprint’ , ‘Deadly Shot’ and ‘Stun Self-Destruct’ (Require a certain ATK level)
Zombies are equipped 2x ‘Zombie Grenades
All zombie classes are free to choose
Zombies stand still to recover their health
Open ‘Game Menu’ with [M] to: Select Zombie Class, Open Item Merchant,…

Have you ever seen a dynamic sky in CS1.6 ? Комментарии: